When Ann Kelle released the owl and whale prints of Urban Zoology, I loved them. When they were released in “minky cuddle”, I adored them – I made tons of beautiful, warm and fuzzy blankets for myself and the people that I love the most. When I saw that they’d been released in “silky satin”, I swooned. 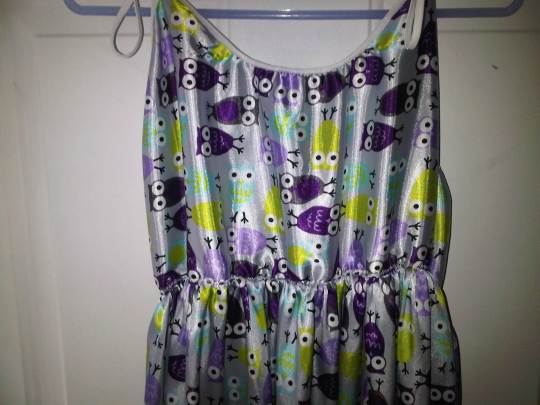 I thought it would be perfect for pyjamas! So soft… so very very… soft… ahem! The material is a little tricky to work with – I thought it would be more slippery than it actually is – it’s actually not too bad, it slides in one direction but not the other so it’s pretty easy to keep together. The toughest thing about it is how fast it unravels. You practically have to finish every edge before you start assembling everything otherwise by the time you get to the end it’s just a huge mass of… ravels? Is “ravel” a noun?

Anyways, the dress itself is quite long with an gathered skirt attached at an empire waist. I used folded-over-elastic (FOE) around the top and as straps – I don’t know what’s wrong with me that I can’t use FOE. I use a straight stitch and it stretches it out. I use a stretch stitch, it stretches it out. I use a zigzag stitch and it STRETCHES IT OUT! Does anyone have any idea what I’m doing wrong here? FOE always stretches out for me – you’re supposed to stretch it while you’re sewing, then when you’re finished it should pull the garment into a gather… mine just stays stretched out.

So to combat my completely lack-luster FOE, I shirred the entire back of the top (in the pic I haven’t trimmed the threads back yet. The fit is way better. I love the way that the shirring looks on the “silky satin”, I think I’m going to do that on purpose for something!  I’m also going to shorten the straps, but for now I just tied them up.

I just received an envelope in the mail yesterday… check it out: 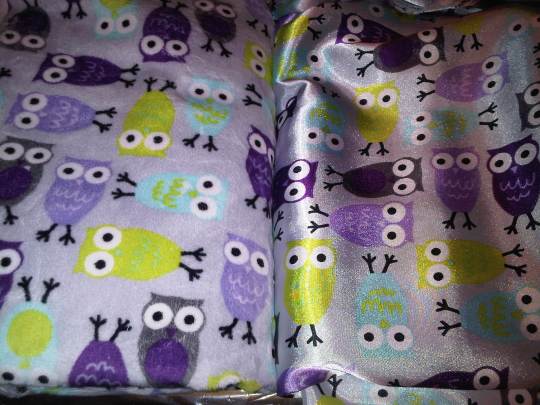 You may recognize the super soft from my vacation sewing, but the satin is new. I thought it was really cool to be able to see the two next to each other! I noticed that compared to the minky, the lines in the satin image are super crisp, which might be intuitive when you think about it, but it certainly must be a consideration when designing for different fabrics, which seems to be a really popular thing to do right now.

I’m so excited to get started with the silky satin! It looks pretty slippery and I think there will be a lot of pinning involved, but I think the end result will complement the cuddle perfectly 😀